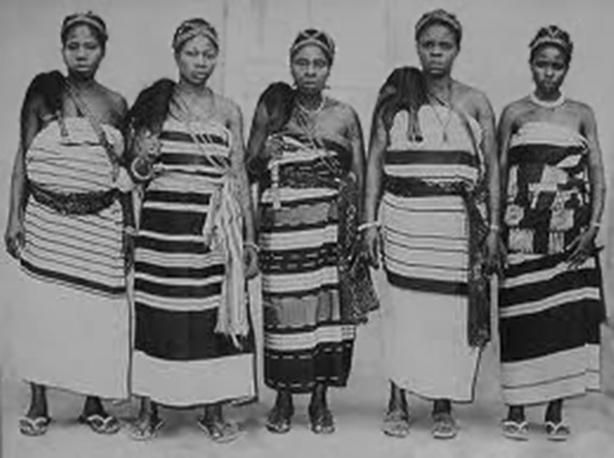 The Women’s War of 1929: Why Is It Still Relevant for Nigeria?

In November and December 1929, tens of thousands of African women in South-Eastern Nigeria danced, sang, and marched in protest against an enforced and exploitative British colonial policy of taxation, and against patriarchal legal structures. These events have since been referred to as the Women’s War, the Aba Riots, or Ogu Umunwaanyi.[1] The women’s weapons were not guns or cannons, but bricks, stones, and their own voices and bodies. In a response well practiced by the British in their colonies, the soldiers were ordered to fire at the women, and approximately 70 women were killed.[2] Many more died from their injuries. The protests continued into early 1930, when a Commission of Inquiry attempted to resolve the women’s grievances with legal reforms, which ultimately brought little change in South-Eastern Nigeria.

In this short blog post, I will argue that whilst the Women’s War was anti-colonial, the women were not motivated by Nigerian nationalism. I will then suggest that a connection can be made between the Women’s War, the Biafran War, and current secessionist movements in the South-Eastern regions of Nigeria.

Some historians have the women’s actions are an early example of anti-colonial Nigerian nationalism. The two principal historians who hold a nationalistic interpretation of the Women’s War are Ekwere Akpan and U. E. Umoren. Akpan has argued that the events of 1929 were “a nationalistic struggle in intention as well as a major revolutionary milestone.”[3] In providing evidence for this claim, Akpan states that the protesting women used the Igbo phrase oha ndom to refer to themselves, which roughly translates as ‘women of all towns’.[4] This, however, fails to take into account the local town networks in the South-Eastern regions that pre-date the colonial formation of Nigeria in 1914. Furthermore, in focusing on the perspective of the Igbo women, Akpan fails to consider how the Ibibio and Efik women involved conceived of themselves. Agreeing with Akpan, Umoren declares that these women were among the “principal actors in the rise of Nigerian nationalism”, as the 1930 reforms “marked the first steps of colonial disengagement in Nigeria.”[5] This is a reductionist view of women’s anti-colonial movements in Nigeria, as it ignores previous women-led protests and political agitation, such as the Nwa obiala, or Dancing War, of 1925.[6]

Moreover, I disagree that the women involved in the Women’s War were fighting against colonial taxation in order to achieve an independent or more unified Nigeria. I agree with the majority of historians that the Women’s War was anti-colonial. The women attacked buildings and institutions directly related to colonial rule, and argued for the removal of colonial forms of governance, such as the Warrant Chiefs. However, the Women’s War was decidedly anti-nationalistic, precisely because it was anti-colonial in nature. It was colonial rule that invented the concept of Nigeria in 1914, and there is little evidence to suggest that Igbo, Efik, or Ibibio women involved in the Women’s War agreed with, or subscribed to, the idea of a united Nigeria. Indeed, consistently rallied for group-specific, pre-colonial systems of government. Both Akpan and Umoren’s interpretations of the Women’s War must be read in the context of a post-Civil War Nigeria, as this helps to explain their determination to extract a nationalist reading from the Women’s War.

How, then, is this event, now nearly 100 years in the past, relevant for Nigeria today? Since Nigeria’s creation in 1914 by Sir Frederick Lugard, the country has struggled with its borders, its regional differences, and secessionist movements from the West, North, and in particular the South. To understand Nigeria today, we must understand the Biafran-Nigerian War of 1967-1970, in which the South-East regions of Nigeria broke away and declared the Republic of Biafra.[7] Although Biafra was legally declared void nearly 51 years ago, there are still those in West Africa and its diaspora that believe Nigeria’s borders were wrongly and forcefully imposed, and that Biafra should once again exist as a country. Adam Mayer stated in 2016 that Nigeria was still undergoing a “current low-intensity civil war”, which, in 2021, shows no signs of slowing down.[8] In the last two weeks, women from the Indigenous Peoples of Biafra (IPOB) have been demanding the release of their leader Nnamdi Kanu from custody, protesting outside London government buildings.[9]

Drawing from my research of both the Women’s War and the Biafran War, and viewing Nigeria’s secessionist movements today, I argue that a thread can be followed in the past 100 years of anti-colonial, anti-nationalist movements in the South-Eastern regions of the country. My intention is to investigate this further, through a series of oral interviews in Nigeria and throughout its diaspora, in order to answer the questions:

What are the connections between the Women’s War and the Biafran War? How was the Women’s War remembered and commemorated by Biafran men and women, if at all? And what do these memories mean for Nigerian nationalists and anti-nationalists

Author’s Bio: Emma Davies (b. 1999): I am a History graduate of Queen Mary, University of London. I completed my undergraduate degree with a 1st, and my work on the Women’s War of 1929 was awarded the Mile End Institute Research Prize in 2020. I intend to continue my studies in 2022, with the MSc in African Studies at the University of Oxford, followed by the DPhil in Area Studies (Africa), also at Oxford.

Achebe, Chinua, There Was a Country (2013, Penguin Random Books: London)

Akpan, Ekwere, ‘Critical Reconsideration of the Literature on the Women’s War in 1929’. Chike Dike, ed. The Women’s Revolt of 1929: Proceedings of a National Symposium to Mark the 60th Anniversary of the Women’s Uprising in South-Eastern Nigeria (1995, Lagos: Nelag & Co.)

[1] I exclusively use the title of ‘Women’s War’ in this blog post.

[2] For further examples of British colonial violence, see Kim Wagner, Amritsar 1919: An Empire of Fear and the Making of a Massacre (2019, Yale University Press)

[3] Ekwere Akpan, ‘Critical Reconsideration of the Literature on the Women’s War in 1929’. Chike Dike, ed. The Women’s Revolt of 1929: Proceedings of a National Symposium to Mark the 60th Anniversary of the Women’s Uprising in South-Eastern Nigeria (1995, Lagos: Nelag & Co.)