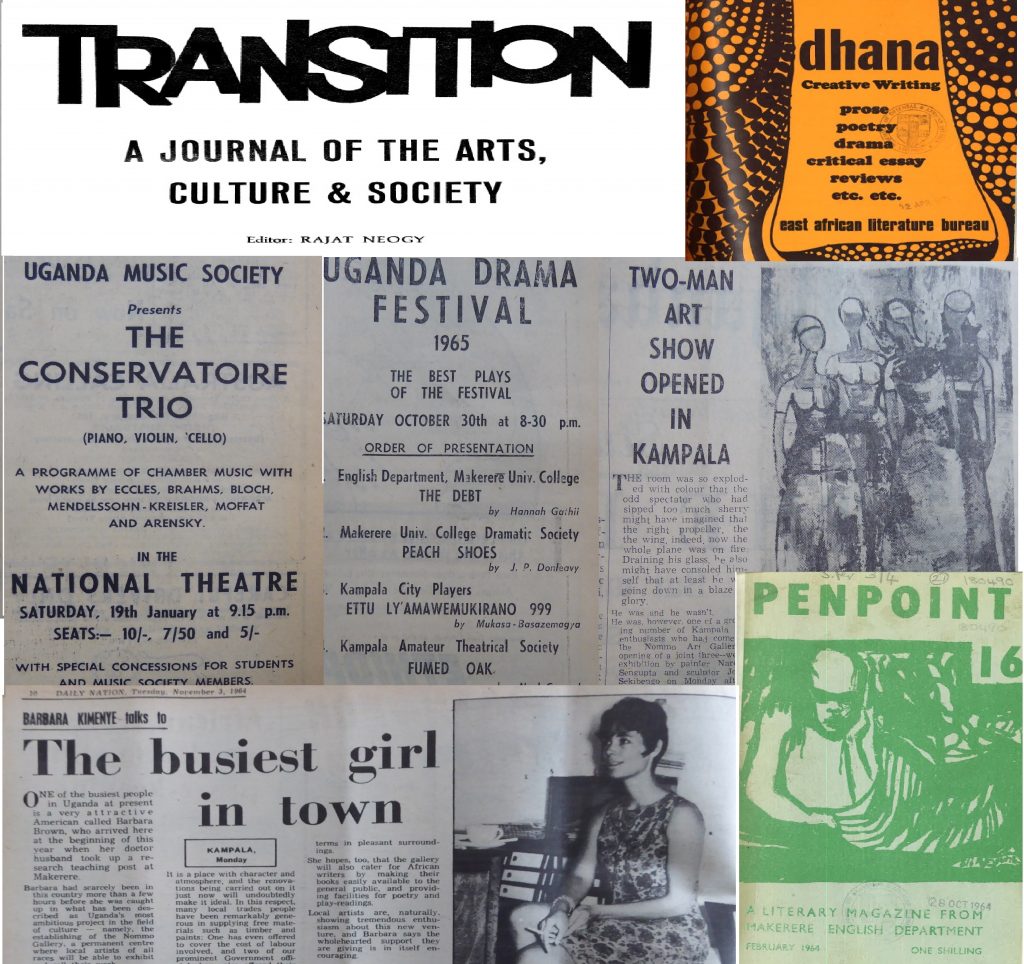 Literature, Music and Fashion: Cosmopolitan Kampala in the 1960s

Asian-Ugandan-hosted literary salon; South African-owned nightclub; glittering social scene – for Uganda’s multiracial elite in the 1960s, Kampala offered ample opportunities for socialising and entertainment. Unlike Nairobi, the capital city of neighbouring Kenya where Britain had established a settler colony and an accompanying apartheid system, Kampala was touted as a liberal city with “a great deal of mixing going on all over the place” between constructed racial groups, as Ugandan author Barbara Kimenye later wrote in her unpublished memoirs.[1]

Kampala was home to Makerere University, which was arguably the best university in Africa in the 1950s and 60s. The famous Makerere Hill, with its recognisable white and blue ‘ivory tower’, attracted academics from all over the world, both African and largely non-African, who contributed to Kampala’s intellectual life. The university’s Literature Department trained some of the best writers from across the continent, and Kampala’s literary scene at the time was unparalleled across Africa – rivalled perhaps only by that of Ibadan, Nigeria. The fact that the African Writers Conference was held at Makerere in 1962 is testament to the university’s vibrant academic culture. Attended by some of the greatest names of African literature – such as Chinua Achebe, a young James Ngugi, Ezekiel Mphahlele, Grace Ogot and Rebeka Njau – the conference initiated debates around African literature that were to determine the field’s direction for decades to come. Kicking up one’s heels in the bars and clubs of Kampala in the evenings was as much an integral part of the conference as discussions on literary theory, as Ngũgĩ wa Thiong’o later recalls in his memoirs, Birth of a Dreamweaver: “Some of the writers from abroad did create social havoc in Kampala; they attracted groupies, women – white, black, Asian, married or not – who swooned at their company. [They] left a trail of broken hearts and also a few broken homes.”[2]

The intellectual scene of Kampala was also effortlessly combined with its nightlife by the renowned Rajat Neogy, journalist and founder of Transition magazine, “the most daring and important literary and political journal of Africa’s 1960s”, which published writers from all over Africa.[3] His literary salons were a highlight of Kampala’s social scene, and they attracted writers and artists of all races and backgrounds, reflecting a new and changing Uganda. The circles were small, and familiar names in African history attended these salons: it was at one such party, for instance, that Ngũgĩ wa Thiong’o met, and was immediately captivated by, Barbara Kimenye, East Africa’s most renowned children’s book author.[4]

Observing Barbara Kimenye’s social life also gives us insight into the vibrancy of Kampala’s social scene. A prominent social figure in Kampala, she was part of the entourage surrounding Kabaka Mutesa, the then King of Buganda, and was a regular at palace parties and other events around the city. She met and interacted with Ugandan royalty of different ethnic groups, danced with the King of Burundi when he visited the Kabaka, and modelled in a fashion show. She had tea with South African writer Noni Jabavu and the latter’s husband, Michael Cadbury-Crossfield, while the couple were living in Uganda, and a chance meeting with Kenyan politician Tom Mboya in a nightclub changed Barbara Kimenye’s career direction.[5]

Kampala in the 1960s was a city that celebrated diversity in creativity, entrepreneurship and culture, and the cosmopolitan figures that were drawn to its social scene can be seen as the predecessors of the modern ‘Afropolitan’.[6]  Of course, it must be emphasised that these circles were the reserve of the socio-economic and intellectual elite, and would have been alien to the majority of Ugandans at the time. Socialising and interacting across racial barriers would have largely taken place along class lines, with expatriates mingling with elite Ugandans, and, presumably, rarely with working class Ugandans. In a time of increasing political repression, violent events formed a juxtaposed backdrop to the decadent whirl of Kampala high society’s sundowners and parties, such as the Ugandan lost counties referendum of 1964, or the Nakulabye Massacre in the same year, in which state police slaughtered civilians in the Kampala suburb.[7]

When Idi Amin seized power in 1971, Kampala’s cultural life largely collapsed, and many intellectuals and creatives fled Uganda. Those who remained either refrained from any form of knowledge or art production entirely, or continued to do so at the cost of their lives. However, memories of Kampala’s past during Africa’s decade of independence remained alive – a time during which it attracted thinkers and glitterati from all over the world. A multicultural and dynamic metropolis, Kampala truly was a global city.

Author’s Bio: Anna Adima is a Leverhulme Trust Doctoral Scholar at the University of York, where she is researching the history of women’s writing after independence in Uganda and Kenya. Anna is currently a visiting research student at the University of Edinburgh. Her PhD is part of the broader Leverhulme-funded project, ‘Another World? East Africa and the Global 1960s‘.