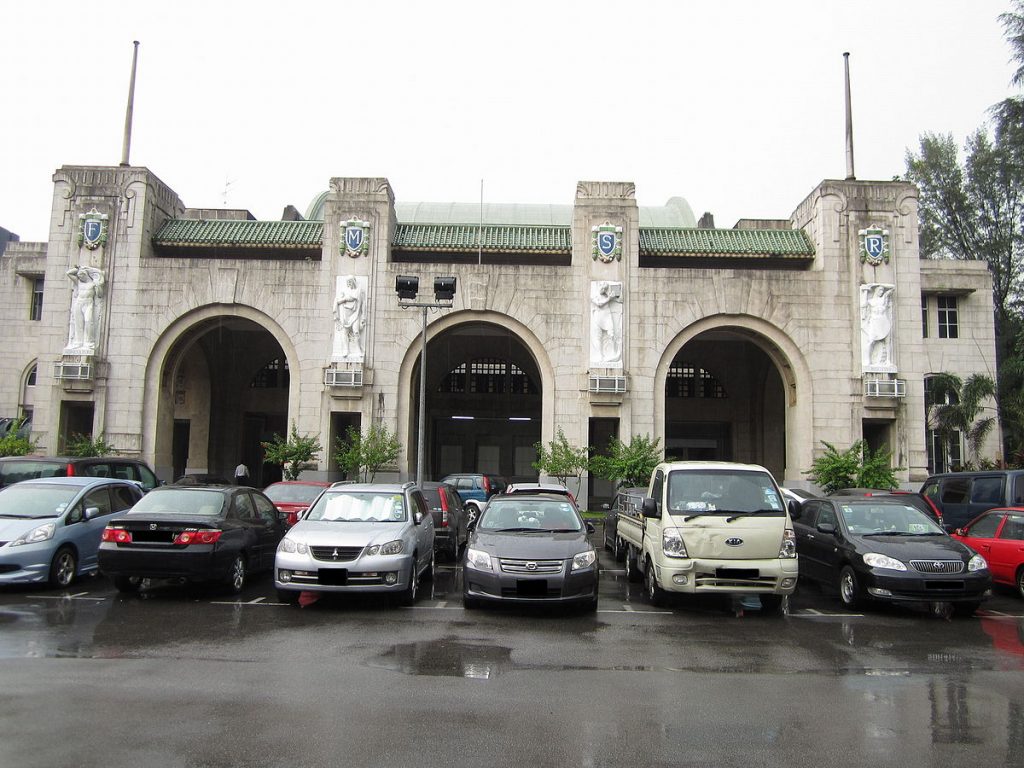 Standing shuttered along Keppel Road today, the Tanjong Pagar Railway Station has witnessed the passing of Singapore’s colonial, post-war and post-independence eras. Once envisioned as “one of the most important nodal points in the whole world’s scheme of communications”, the station was buffeted by the evolution of transportation and the immense political changes that affected the island[1].

Constructed between 1929 and 1932, Tanjong Pagar Station was officially opened by Straits Settlements Governor Sir Cecil Clementi on 2 May 1932.[2] Designed by famed colonial architectural firm Swan & Maclaren, it features a high barrel-vault ceiling to facilitate ventilation. The walls featured murals depicting the primary Malayan economic industries such as rubber tapping and tin mining. At the entrance stand four large statues representing Agriculture, Commerce, Transport and Industry. The initials of the Federated Malay States Railway (FMSR), the original operator of the network, are installed above the statues.[3] 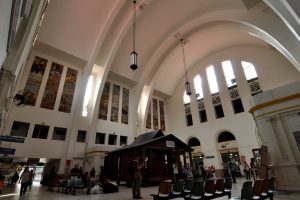 While chiefly intended to allow natural resources to be transported efficiently from the deep interior of Malaya to Singapore’s bustling harbour for export, the railway also became a tourist line, offering leisurely trips from Singapore through the Malayan jungles to towns like Kuala Lumpur, Penang and onward connections to Siam (Thailand).[4] Cheap fares and monthly season tickets made the railways a popular travel option, and a great many journeys began or ended at Tanjong Pagar’s imposing hall. A luxury hotel occupied the upper floors of the station and its manager was later acknowledged as the second-longest serving hotel manager in the world.[5]

After the Japanese Occupation ended in 1945, the FMSR was reorganised into the Malayan Railways in 1948 as the Federated and Unfederated Malay States were unified into the Federation of Malaya. While Singapore became a separate Crown Colony, the Malayan Railway continued to operate Tanjong Pagar station under the terms of the 1918 ordinance which had vested ownership of the network with the FMSR via a 999-year lease.[6] During the Malayan Emergency (1948-1960), the station and railway yards were declared protected areas to deter sabotage by insurgents.[7]

When Singapore was part of Malaysia from 1963-1965, a railway extension was built connecting the new industrial estate at Jurong in the island’s west.[8] But despite this, it was clear that the railway was beginning its slow decline. As freight shifted to road transportation, the railway’s share of goods transport fell from 40.6 percent in 1962 to 18.15 percent by 1975.[9]

With coach services and flights becoming popular options for travel between Singapore and Malaysia, the station’s maintenance began to suffer neglect. When a traveller wrote to the Straits Times to complain that “the station is so badly lit that one cannot even read a newspaper”, a Singapore government spokesman tersely replied that the station belonged to Malaysia and therefore Singapore was not responsible for the upkeep of the premises.[10] The Malayan Railways was also embroiled in a legal tussle with the station hotel operator which it wanted to evict as the rooms had become dilapidated.[11]

On the political front, Malaysia and Singapore began discussions as early as 1974 on possibly ending rail services at Johor Bahru at the tip of the Malay peninsula and closing Tanjong Pagar Station.[12] In 1983, Singapore negotiated the sale of 15 hectares of railway land near the station for the construction of a new expressway.[13] Finally, in 1990, both countries signed a landmark Points of Agreement (POA) which specified that Tanjong Pagar Station would be vacated and the land jointly redeveloped with Malaysia holding a 60% stake in the venture.[14]

However, problems resurfaced when Malaysia claimed that the POA would take effect only when it decided to leave Tanjong Pagar. Malaysia also refused to move its customs and immigration posts along with Singapore from the station to Woodlands, which was closer to the border. Singapore went ahead with the move, ensuring that passengers had the bizarre experience of being granted legal entry to Malaysia at Tanjong Pagar before legally exiting Singapore at Woodlands.[15] During this period of bilateral tensions, a large signboard labelled “Welcome to Malaysia” was placed above the station entrance. This was technically untrue as Malaysia only had partial sovereignty over the station.[16]

In the meantime, the station remained a popular food haunt, with foodies paying visits to the M Hasan Railway Station Canteen where excellent briyani and chapati could be found. The close-knit community of railway staff and vendors had formed a “kampong” (Malay village) among themselves.[17] Heritage and rail buffs also continued visiting the station, where time increasingly stood still as the rest of Singapore developed at breakneck speed. 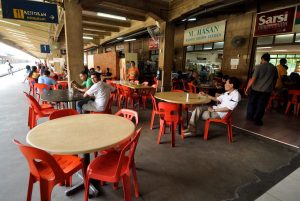 After nearly two decades of impasse, a new generation of political leaders finally broke the deadlock when an agreement was reached in 2010 to close the station the following year.[18] The announcement sparked a wave of nostalgia as Singaporeans flocked to buy tickets for the remaining services and take Instagrammable shots around the building. Heritage enthusiasts were relieved when the station building was declared a national monument and therefore protected from redevelopment.[19] On June 30, 2011, the Sultan of Johor drove the last train out of Tanjong Pagar and the station fell silent after 79 years.[20]

The Tanjong Pagar Station is closed to the public as a new Mass Rapid Transit (MRT) station is built directly under its station platforms.[21] Once completed in 2025, the building would be one of the entrances to the new MRT station, letting the grand old dame once again be a “nodal point” of travel.

Author’s Bio: Dhevarajan Devadas is an MA student in the Department of History at the National University of Singapore, where he specialises in leisure travel and the social history of the British Empire during the interwar period. He tweets regularly about history at @historyogi.

[4] Singapore: a Handbook of Information (Singapore: Publicity Committee of the Rotary Club of Singapore, 1933), 47.

[9] Kong, How Kooi. “Government in the Transport Industry: A Case Study of the Malayan Railway,” 1979.