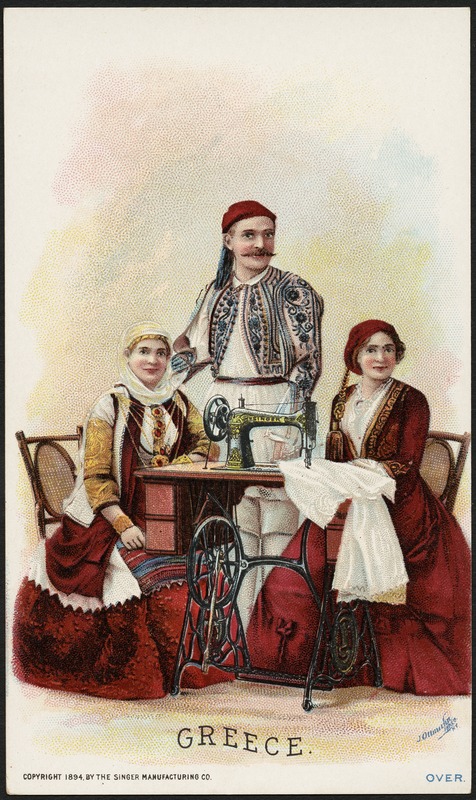 Home   »  Global History Blog   »   The “Great Civilizer”: The Global Diffusion of the Sewing Machine and its Impact on Greece during the Late 19th-early 20th Century

The second half of the 19th century signifies the dawn of a new era, marked by unprecedented changes in the social, economic and technological level.[1] These changes, combined with the establishment of a capitalistic market and the steady rise in income per capita, produced a new range of consumer goods, such as sewing machines, typewriters and bicycles.[2] The sewing machine was considered the “most prominent American mechanical invention of the 19th century” and managed to spread across classes and genders.[3] Indeed, it was a labor saving device; it was affordable, allowing even lower class people to purchase it.[4] It was not exclusively a woman’s machine but it was mainly used by women, especially in industries, opening thousands of low-paid working positions.[5]

The person who changed the history of the machine was Isaac Singer, whose company dominated the US market and later the European one through its agent Georg Neidlinger who expanded Singer sales to most European countries, the Middle East and the Balkans.[6] Regarding the latter, Godley’s research shows a sharp increase of the sales in the region; from 200 machines in 1881 to 88,509 machines in 1912 with Ottoman Empire and Greece dominating the sales.[7] In order to satisfy the needs of the market, Singer built factories in Europe, starting from Clydebank, Scotland in 1870, the largest factory in the world for the production of consuming goods, turning out 8,000 machines per week.[8] By 1905, Singer had 80% of world’s market share and its numbers were unprecedented: 61,444 sales personnel, 4,552 branch offices, 30,000 employees and 1,250,000 machines annually produced. Moreover, they had factories in Germany, Russia, Scotland, Austria and the USA; in other words, they were a global colossus.[9] 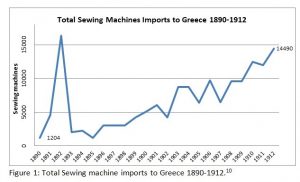 The diffusion of the sewing machine in Greece followed a noteworthy course. The total sewing machine imports to Greece between 1890-1912 indicates the significant increase in the imports of sewing machines in Greece; according to the statistics, only 1204 sewing machines were imported in 1890 in comparison to 14,490 in 1912.[10] On the other hand, sewing machine imports by country of origin for this period shows that England and Germany were the leading exporters, certainly due to the fact that Singer and other companies had factories and warehouses in these two countries for an efficient distribution in Europe. 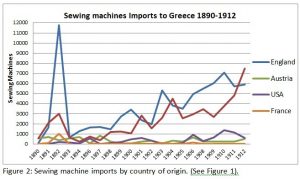 Advertisements and commercial guides demonstrate a wide range of sewing machine models from the USA (Howe, Singer), France (Hurtu), Germany (Köhler) and Britain (Belgravia), costing about 45-65 drachmas.[11] Most of the companies had exclusive agents, Greeks and foreigners, to promote their products; usually engineers such as Vlagalis, Vasileiades and Grebmeyer[12] or merchants, such as Konstantinou and Consolas.[13] The sewing machine in Greece became popular not only in the middle and upper classes but also for lower-class people too. For some it was a means of survival while for others “the most beautiful and useful gift for the New Year”.[14] Additionally, it is not a surprise that the main target group was the female population and that is why drawings of women using the machine can be found in the ads; one of them suggested that “the foot pedal of Singer sewing machines are so easy to use, even for a 12 year old girl”.[15]

A very large share of the imported machines was attributed to Singer, which became by far the most popular company in the country. The main person behind Singer’s success in Greece was Neidlinger, whose name was included in every Singer advertisement.[16] The dynamic of Singer can be seen clearly  after 1880’s, when Singer ads were very often published and were significantly larger than any other. In many occasions, Singer advertisements covered a whole newspaper page, which required a notable amount of money.[17] According to various newspapers and city guides, the company had branch offices in Athens, Piraeus, Patras and agencies in at least 65 Greek towns, creating a remarkable network. The Singer machine would continue dominating the Greek market in the post-WWI era, once more by creating innovative strategies: the electric pedal and the sewing classes in small communities.

Author’s Bio: Argyrios Sakorafas is a Master’s student in Global History at Freie Universität/ Humboldt Universität zu Berlin. His research focuses on global mobilities during the nineteenth century, economic history and modern Greece. This article is part of his ongoing dissertation research on the global trade networks during the late 19th– early 20th century Greece and the Balkans.

[1] Uri M. Kupferschmidt, “On the diffusion of ‘small’ western technologies and consumer goods in the Middle East during the era of the first modern globalization.” A global Middle East: mobility, materiality and culture in the modern age, 1880-1940 (Tauris, 2015).

[3] For some, it was considered the “Great Civilizer” and it was introduced into “underdeveloped” places in order to educate the locals. See the main picture showing King of Caroline Islands learning how to use the sewing machine. R. B. Davies, Peacefully working to conquer the world: Singer sewing machines in foreign markets : 1854-1920, (New York: Arno Press, 1976), 2.

[11] See the advertisements of the period in the newspapers Efimeris, Akropolis.