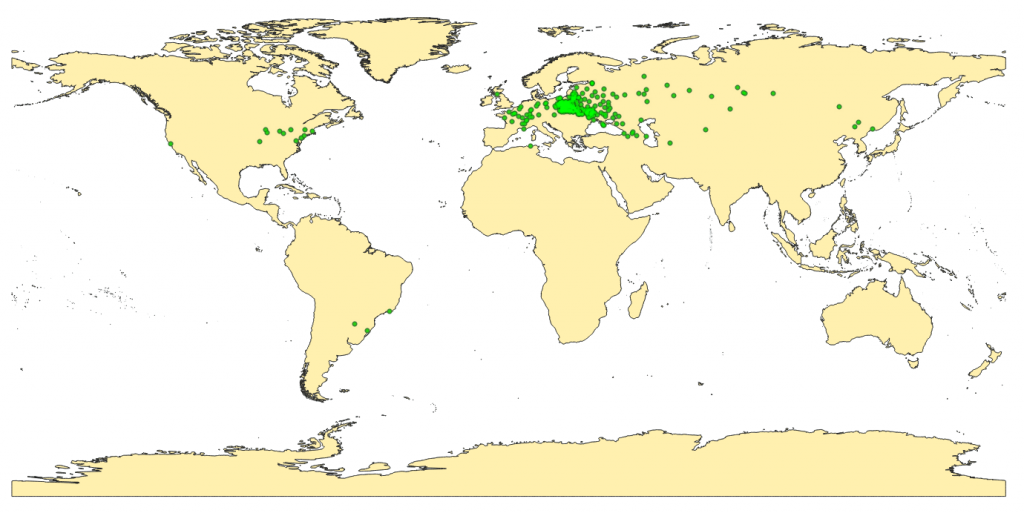 Ways to Track Down a Transnational Movement: Esperanto, Warsaw, and Polish Doctors

Capturing networks and movements may be particularly difficult when they stretch across different countries and the sources seem unproductive at first glance. However, this piece will attempt to make precisely such a transnational movement accessible and also visualisable. The movement in mind here is the Esperanto movement. Esperanto – a planned language of the late 19th century and the idea of a fraternal world without language barriers. Considering this idea in the spirit of its time of invention and the rise of means of communication, it is not surprising that Esperantists also sought contact with their peers. To study the contacts between individuals, extensive archives are essential. But what to do if these are not available? The language creator, Ludwik Zamenhof, systematically collected addresses of those interested in his language from the very beginning. After the institutionalisation of his movement, official yearbooks with extensive directories, divided according to place of residence and occupation, followed later. Parallel Esperanto world congresses, which began in 1905, further contributed to the publication of sources on the movement. Lists of participants and protocols can show how local actors presented themselves on the international stage. In this article, the focus is primarily on Polish representatives, who were, however, a nation without a state at the time. Where did the actors come from? What hopes did they have for their participation? And which networks stand out? These and other questions will be examined in the post by visualising the address lists in maps and evaluating a specific group of actors – the Warsaw medical profession.

When looking at a transnational movement, the application of a transnational perspective is of course crucial. A key component of transnationalism is the splitting up and examination of different scales. In this context, the topic is to be approached from the large to the small, i.e. from the national to the local or individual level. The early Polish Esperanto movement began to emerge in Warsaw, the place where Zamenhof published his first textbooks. A second centre developed in Lviv in Galicia, where the first Polish Esperanto journal was published in 1906. From then on, sources are available that not only bring reports from the various clubs but also provide lists of subscribers and members. A special case is an address book of Polish Esperantists published in 1909. Based on the address book, the following map has been created, representing 1,831 Polish Esperantists in 349 locations around the world. While the method and implementation may look relatively simple, this visualisation is a good heuristic tool to raise further questions and search for answers.

One of the most important factors of this map is the fact that all the people included explicitly considered themselves to be Polish and moreover, some of them were members of the official Polish Esperanto Association. In the spirit of transnationalism, it shows how the “idea of Esperanto” circulated and was carried int the world by Poles alone. The entries outside the Polish language area, however, are widely scattered. In the Russian Empire, numerous Esperantists can be found along the West-East railway lines, including Polish railway workers or border guards, a Polish architect in Auxerre, or Polish students in Antwerp and Zurich. A curiosity is also the employees of eight different sugar factories, in the eastern part of today’s Poland and Ukraine, whose names and employers are known, but it is difficult to prove a valid network from today’s perspective.

Let’s now point our lens from the world map to Warsaw and go “glo-cal”. The address book entries provide not only the place of residence but also the exact address and occasionally the occupation. The following map shows the distribution of Esperantists within Warsaw in the form of a “heat map”. In addition, the black dots highlight the Esperanto physicians. From this visualisation, the clustering of Esperantists in certain residential areas becomes particularly clear. The two most illuminated neighbourhoods are to be found in the districts “northern and southern inner city”. This area flourished at the turn of the century and was characterised by new representative historicism and art nouveau buildings. Most of the population in this area was middle-class. From sources of Warsaw’s city history, it can also be deduced that some of these were assimilated Polish Jews who had previously lived in the Jewish-dominated northwest of Warsaw and moved into better residential areas as a result of their economic prosperity. By and large, however, the Warsaw Esperantists consisted of a majority of ethnic Poles. One group that had a noticeably high proportion of Jewish people were the Esperanto physicians. These can be found on the map predominantly along the major streets. In total, this group counts 57 individuals, at least 11 of whom worked at the Jewish hospital. Esperanto pioneers who went on active membership recruitment were also employed there and are one reason for the spread.

In summary, this short study shows how much can be extracted from a limited number of sources. The visualisations provide new starting points and especially sociocultural aspects within a city can become visible and provide interesting insights.

Author’s Bio: Marcel Koschek is a PhD candidate at the University of St Andrews in a co-tutelle programme with the University of Bonn. His dissertation explores transnational networks in the Esperanto movement. The focus is on Polish actors and their role as “local internationalists” in the movement before the First World War.