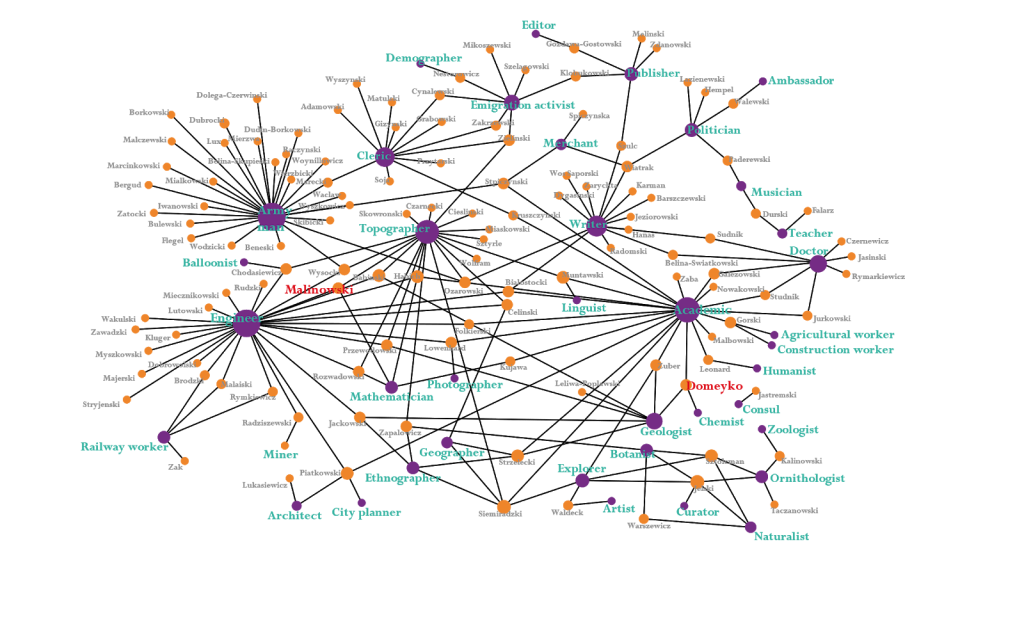 Migrants and their Networks in Transnational Science Communication

Sticking rigidly to the confines of a single discipline can be quite limiting. When I started thinking about my research focused on understanding the Polish migrants’ role in the circulation, production and communication of scientific knowledge in Latin America and partitioned Poland between 1830 and 1890, I knew I wanted to expand beyond History approaches and incorporate methods from both Digital Humanities and Social Sciences in my work. The fruits of archival research would be presented and examined not only in textual form, but also through informative, ideally interactive visualisations.

The majority of the visualisations I have produced so far are network maps illustrating different aspects of migrants’ involvement in science communication. The visualisation above shows the popularity of different occupations among the Polish émigrés to Latin America in the Nineteenth Century. It also illustrates the overlaps in professions; for example many engineers were also working as topographers or academics. The network below, centres around Ernest Malinowski, lead engineer connected to Perú’s Ferrocarril Central Andino (1871-1876) and his personal connections. 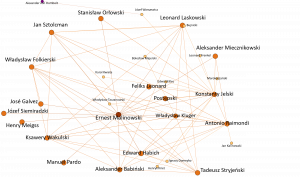 The basic elements on a social network map are nodes and edges (Image 1), but as evident on even just two of my visualisations, it is possible to take different positions on what or who constitutes a node, and what or who forms an edge. Let us take as an example Sanjay Subrahmanyam’s work on intellectual networks in the Ottoman empire, where the author traces the network of a prominent intellectual Mirza ‘Abd al-Rahim.[1] In Subrahmanyam’s work, individual historical figures provide vital connections facilitating intellectual, monetary and other exchanges and can be perceived as cultural bridges between different groups and spaces in which exchanges take place.[2] The individuals are the edges or connections, while cities are the nodes in a network of exchange.[3] An alternative approach can be found, for example, in Ronald S. Burt’s work on ‘Brokerage and Closure’, where it is the people who are the nodes in a social network, while the relationships they form are the connections or edges.[4] Thus, depending on the configuration of a social network map, it can be helpful in determining the individuals or the spaces vital for the circulation of ideas and science communication.

Mapping historical networks is not without its issues. For one thing, the term network has often been used in historical discourse largely in a metaphorical sense, loosely evoking the existence of physically or figuratively interconnected societies or individuals. As a result, in many historical works the word network could be easily replaced by alternative terms—such as ‘group’, ‘community’, ‘kinship’ or ‘social ties’—without any significant change in meaning.[5] While granting that the network metaphor has a strong descriptive and visual power, historian of Science Kapil Raj outlined a number of issues with using the network concept.[6] Among others, network analysis tends to disregard the physical space between those in a network. Furthermore, the network metaphor can be seemingly expanded infinitely to include every person in the world. There is also the illusion that knowledge can flow completely freely between the nodes of a network. Anyone interested in the power-dynamics and hierarchies at play in the knowledge formation processes, will know how far that is from reality. Keeping that in mind, but being equally encouraged by historian Claire Lemercier’s argument—that if historians approach networks in a more systematic way through formal network methods, they will be able to be less vague in their assertions and make stronger points—I decided to cautiously apply network theory to my work.[7]

An essential step a historian must take to incorporate network analysis in their work is to decide what theory and methodology they want to follow. And there are so many! In my research, I employ elements of Social Network Analysis (SNA) methodology, which combines qualitative and quantitative research, uniting textual and mathematical analysis. My aim is to gain a better understanding of groups of people through mapping the connections between them. To use SNA methods, a historian needs to sort and categorise the fuzzy, historical data obtained through archival research into an organised database. Once in this format, historical data can easily be presented visually.

Making network visualisations can be very fun and there are many sophisticated Open Source programs readily available. When I first started working with visualisations, I found Palladio, developed and hosted by Stanford University very helpful. Gephi, too, offers great functionality, though it requires a bit more time to set up. For practical advice on how to harness digital tools for research purposes I highly recommend the Programming Historian website, which is full of easy-to-follow tutorials and lessons.

Historical network research is gaining popularity and offers interesting new ways of approaching complex questions. Numerous scholars have successfully demonstrated that network analysis and visualisations have the potential to bolster understanding of collaborative knowledge formation and science communication, while remaining sensitive to locality and context. If this blog post piqued your interest, please get in touch with me, or find out more in the Journal of Historical Network Research, published annually since 2017.

Author’s Bio: Aleksandra Kaye is a PhD candidate in the Department of History at University College London, and an Exchange Scholar in the Department of Sociology at the Graduate School of Arts and Sciences at Yale University. Her thesis is entitled ‘Mapping the Polish Knowledge Networks in Nineteenth-century Latin America, 1830-1890’. Twitter: @Aleks_Kaye