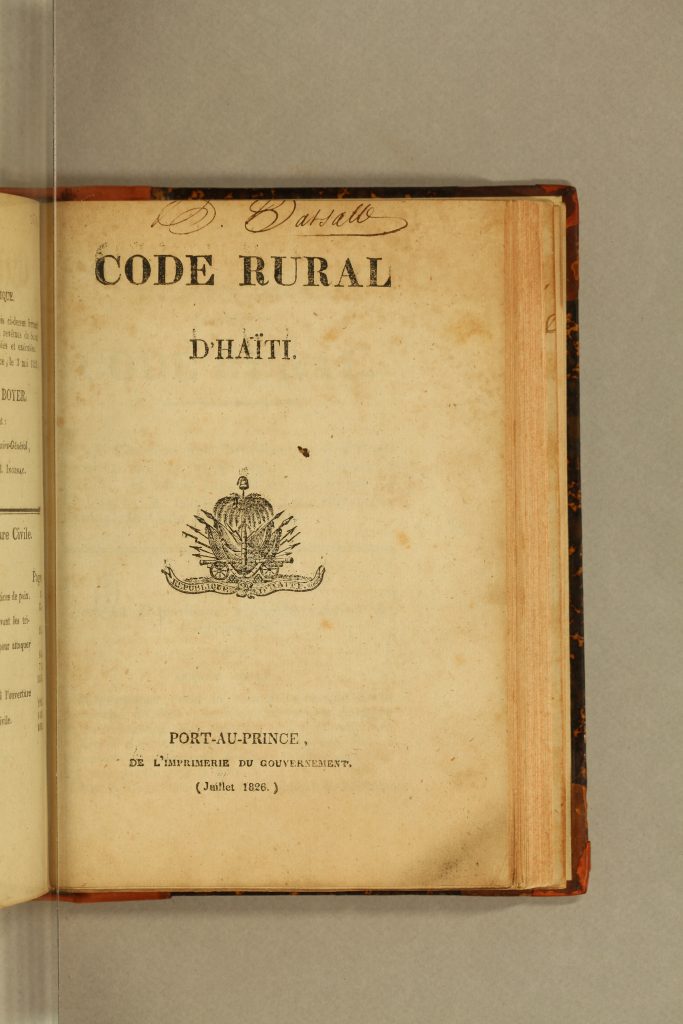 President Jean-Pierre Boyer, who ruled Haiti between 1818 and 1843, was responsible for achieving a relative moment of internal political stability in the country: he unified the entire island, which removed possible conflicts with the reign of Henry Christophe as well as the Spanish crown, he managed to negotiate the recognition of Haiti by France, and he carried out the process of codifying Haitian laws.[1] These last two processes may be related to each other but also related to the achievement of national sovereignty by Haiti.

The agreement with France resulted in a debt of 150 million francs to compensate French settlers, but it also resulted in a new nationalist view from the Haitian government. During official post-agreement speeches, especially on occasions when the population could hear, such as the Independence Celebration or Agriculture Day (Fête de l’Agriculture), the president and other members of the government emphasized that, after 1825, Haitians could feel completely free and with a light heart.[2] This new era was also an era for a new kind of citizen: the rural worker (citoyen de profession agricole; cultivateur; agriculteur). On Agriculture Day in 1831, Judge Depas pointed out to his audience that the “…rural worker is also the soldier who fought for independence in 1804, expelled the enemy and now has laid down his weapons and maintains independence through agriculture.” [3]

In this context, the codification process resulted in the publication of the country’s Law Codes, including, the Rural Code (1826). Formed by 202 articles that covered all aspects of rural worker’s life, the Rural Code placed agriculture as the most important source of income for the state.[4] By exporting agricultural products, the country would be able to pay the debt to France. Thus, it was the rural worker who was the main agent who should keep the agriculture and the state. The new nationalist discourse appeared in the Rural Code as it transformed into compulsory labor policies, military surveillance practices, disciplining of the worker through the Rural Police, and bureaucratization of the labor relationship. If independence was conquered by organized soldiers and war, it would be maintained only if the workers, inserted within a logic of militarized labor imposed by the Rural Code, were dedicated enough to ensure that the debt would be paid.

Despite strict laws, the Rural Code did not work and was officially withdrawn in 1843, when Jean-Pierre Boyer’s government was over. The Haitian state could not dismantle the traditional and autonomous peasants organizations. The strength of the small farmers and collective work groups, which date back to slavery practices against colonial power, resisted to a militarized and authoritarian state throughout the nineteenth century. After 1804, all sugar cane fields were burned down and the now rural workers refused to go back to any kind of labor similar to slavery times. The rise of small farmers was one of the most successful consequences of the Haitian Revolution.[5]

The creation of the Rural Code cannot be interpreted merely as a continuation of colonial practices of control over the enslaved. In the same period that Boyer approved this code, other legal codes were created: Penal Code, Civil Code, Code of Commerce. On the world stage, it was important that, about 20 years after independence, Haiti presented elements to the international community that could be interpreted as signs of the establishment and strengthening of the state. Legal coding was one of those elements. When the country became independent, Haiti became a special place, to where other countries and organizations were looking in an attempt to understand the functioning of a free country made up of black people and ex-enslaved people. Haiti needed to be seen as civilized by the world as a way to remain free and sovereign.

The Rural Code is not only a legal code to control rural labor, but it is also a document that enables to understand how concepts of freedom, citizenship, free labor, and national unity were manipulated by the state, especially concerning rural workers and the international political arena. All the laws of the Rural Code were built from specific expectations about workers and agriculture. So claiming that the Rural Code reproduced colonial laws simplifies the complicated social and political structure on which Haiti was being built. More than a copy, nineteenth century Haitian laws were a space of tension for the legal legacies of colonization.

Author’s Bio: PhD student in the Department of History at Universidade Estadual de Campinas (Unicamp), where she specializes in nineteenth Haitian history, focused in 1826 Rural Code. She is researching the life of Jonathas Granville, the Haitian who lived in France during the early nineteenth century and his relation to ideas of racialization and mobility in the Atlantic World.

GONZALEZ, Johnhenry. 2012. The War on Sugar: Forced Labor, Commodity Production and the Origins of the Haitian Peasantry, 1791 – 1843 [Doctoral Thesis, University of Chicago].

RAMSEY, Kate. The Spirits and the Law : Vodou and Power in Haiti. University of Chicago Press, 2011.