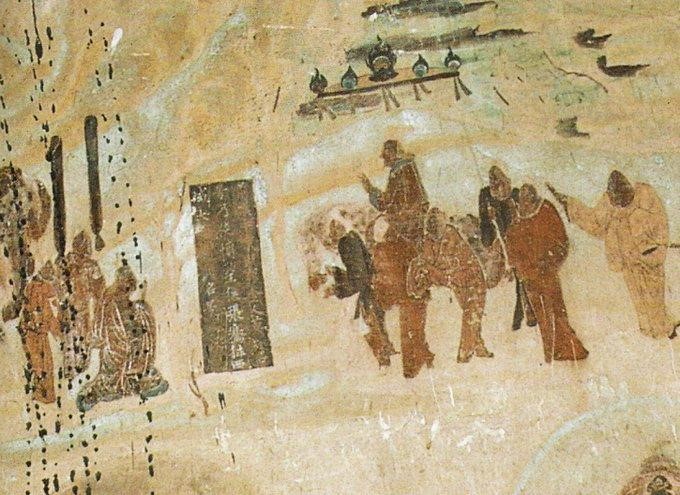 Sino-Persian Exchange Along the Silk Road

What do the words for “lion” (狮子shīzi), “spinach” (菠菜bōcài), and “grape” (葡萄 (pútáo) all have in common in Chinese? They all derive, directly or indirectly, from either Persian roots or are otherwise etymologically or conceptually linked to Iran. Just how far back can ties between ancient China and early Iranian societies in Central Asia be traced?

Sino-Iranian relations go back to at least to 126 BCE, when Han official Zhang Qian traveled to Bactria and Sogdiana. Sogdia and Bactria were Iranian civilizations centered around Samarkand and modern Afghanistan. The overthrow of the Greco-Bactrian state by the 月氏 (Yuèzhī, also called the Tocharians) in 125 CE marks the first historical event noted by both Chinese and European records. Zhang Qian also brought China knowledge of Parthia, which he called Anxi (安息) after the first Parthian king of the Arsacid dynasty, Aršak. Although he did not directly visit, Qian clearly identifies Parthia as an advanced urban civilization. 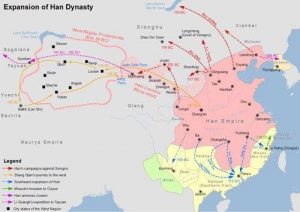 The purpose of Qian’s journey was to seek allies against hostile nomads, and upon his return he convinced the Han emperor of the value of increased contacts with these highly urbane and developed civilizations. This helped stimulate the development of early Silk Road trade. As China expanded into Central Asia and replaced the Xiongnu as regional hegemons by 1st century BCE, they enjoyed close relations with the Iranian states of the Tarim Basin, especially Khotan, Kashgar, and Yarkand.

Over the next few centuries, diplomatic contact between the two regions continued. The Sassanians, called “Bosi” (波斯), sent dozens of embassies to China ca. 400-500 CE. Sassanian-Tang relations were famously close, especially after the Muslim conquest of Persia. “The largest of these embassies…numbered several hundred persons, while even the smaller parties included over 100 members… In the course of one year anywhere from five to six to over ten parties would be sent out.” (Shiji). 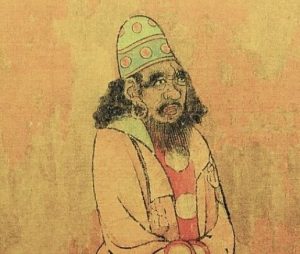 It is worth noting that “Anxi” and “Bosi” do not directly correspond to the Arsacid and Sassanian dynasties or precise geographical locations or political entities. Rather, they are vague terms that refer to various Iranian cultures and polities. Certain surnames came to be associated generically with people of Iranian descent or who originated in cities that were influenced by Persian culture, like 安 An, tied to Bukhara, and 胡 Hu, associated with the Sogdians, an ancient Iranian civilization that spread throughout Central Asia

Sogdian (later Sassanian) merchants and dancers were common in major Chinese cities, especially Chang’an, the Tang capital from 618 CE. Persian musicians, art, and wine merchants were popular diversions. Large caches of Sassanian coins can be found in China from this period. According to the Old Book of Tang舊唐書, “the food of the aristocrats was hu (胡Sogdian) food, their music hu music, and their women clothed in the most exotic hu robes…” 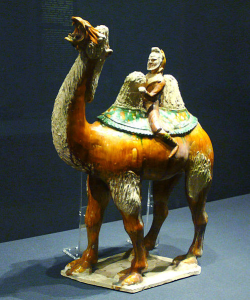 Sogdian merchants and musicians were a frequent and colorful subject of Tang art.

Through these connections, many words, objects, and vegetables of Persian origin came to China. At first glance, spinach seems like one of them. The modern Chinese word for “spinach”, bōcài 菠菜, suggests a Persian origin. 菠/bō combines the 波/bō of 波斯 (Persia) with the “grass” radical 艹. But it is not that simple.

Early Chinese sources on the origin of spinach don’t mention Persia at all. The word 波斯菜 (bōsīcài), “Persian Vegetable”, first appears in a medical manual in 1596. 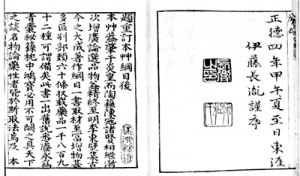 The Compendium of Materia Medica or Bencao Gangmu (本草纲目) is a Chinese herbology volume written by Li Shizhen, and is the first mention of spinach as a “Persian vegetable”

Tang (618-907 CE) and Song (960-1279) sources closer to the introduction of spinach to China credit Nepal, not Persia, as the origin of spinach. The first name for spinach in China was 波棱菜 (bōléngcài), as mentioned in the New Book of Tang新唐書:

“In the time of Emperor Taizong (627-649), Ni-po-lo (Nepal) sent to the Court the vegetable 波棱 (bōléng). Well cooked, it makes good eating, and is savory.” (Trans. Berthold Laufer)

The gift was sent after the Emperor’s request that all tributary states send their choicest vegetable. The name 波棱 (bōléng) does NOT seem to refer to Persia, despite using the same bō (波). Instead it appears to be a transliteration of the name provided by Nepal. The use of 波 is coincidental. The most likely candidate for this word is “paalak” पालक, the Hindi word for spinach.

This makes sense, as spinach was likely introduced to Nepal via India. “Paalak” पालक itself is derived from an early Persian word for spinach, “espanâx” اسپناخ, modern “esfanaaj” اسفناج. This reflects the fact that spinach was first cultivated in Iran. The word “spinach” in English comes from Persian, as in other European languages: The Middle English spinach can be traced to the Old Occitan espinarc, which derived from Arabic إِسْفَانَاخ‎ (ʾisfānāḵ), itself derived from Persian اسپناخ‎ (espanâx). 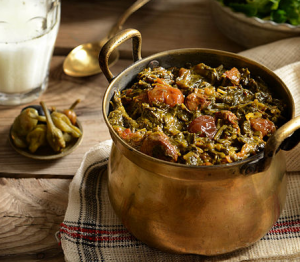 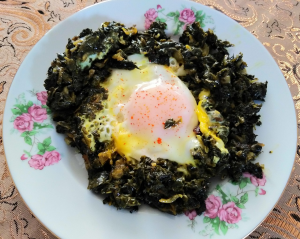 Spinach remains a popular ingredient in many Iranian dishes, such as khoresh e alu-esfenaj (left) and nargesi.

So how did Chinese scholars take to calling it “the Persian Vegetable” if they believed its origins to be Nepalese? One theory is a simple mistake – they mistook the bō (波) to mean Persia, correctly but accidentally identifying the origin. More likely, however, pharmacologists became aware of the Persian origins under the Yuan dynasty, when China had direct connections to Persia, and adopted the new term during the Ming to reflect this new knowledge.

The word for “lion” shares this connection. In Chinese, a lion is called “狮子” (shīzi), and in Persian, “شیر” (shir). Both of these derive from the Middle Persian root šêr (lion). The word “shīzi” is mentioned for the first time as 师子 in the Book of Han  汉书, written around 111 CE, in an entry detailing the Central Asian kingdom of 乌弋山离, and so from the earliest mention was associated with Iranian cultures. 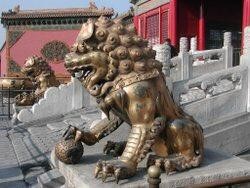 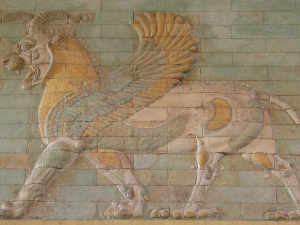 And how about grape, 葡萄 (pútáo). Surely that sounds nothing like angūr, the Persian word for grape?

But that’s because this one is related to باده (bāde), wine, an older word from Middle Persian. Grapes were introduced to China contact with the Bactrians, an Iranian people living in modern-day Afghanistan. The Bactrians spoke an Eastern Iranian language and their word for wine, bādāwa, provided China with “putao”. 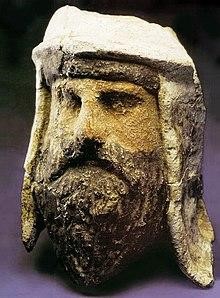 These connections illustrate the cultural and linguistic ties that existed between China and Iran, a set of connections little known, but with profound impact on the history of both of these ancient centers of human civilization.

Author’s Bio: Dr. William Figueroa is a recent graduate of the History PhD program at University of Pennsylvania, where he specialized in historical and contemporary Sino-Iranian relations. He has written a dissertation on the history of Sino-Iranian relations called “China and the Iranian Left: Transnational Networks of Social, Cultural, and Ideological Exchange, 1905-1979”, as well as several articles about modern Sino-Iranian relations for Jadaliyya, The Diplomat, Mondoweiss, and Entekhab. He has also conducted interviews on the 25 year China-Iran Strategic Cooperation Agreement for international media outlets like BBC Persian and Newsweek. He tweets about Sino-Iranian relations @IranChinaGuy.

Green, Nile. The Persianate World: The Frontiers of a Eurasian Lingua Franca.

Hansen, Valerie. The Silk Road: A New History with Documents.